Who doesn’t remember chasing them as a kid, and putting them into jars with holes punched in the lid, and grass down inside the jar, putting them by the bed and watching them until our eyelids grew heavy in sleep?  I can remember the first time I saw them against the backdrop of a mountain while sitting on my grandma’s front porch on Pipestem Creek, darker than pitch outside, and the flickering was everywhere.  I was awestruck to see so many.  Up there, there weren’t street lights or other city lights, so you could see the lightning bugs, and you could see the stars.  You could her the bullfrogs in the pond and the sound of the creek running and “glugging” over the huge stones in the creek bed.  Best sleeping I ever did, was to lie in bed at night after chasing the lightning bugs in the yard until my brothers and cousins and I were all worn out, then just listening to the music of that running creek until we fell into a deep sleep.  Remember that kind of sleep?  The kind where you don’t remember closing your eyes, but the next thing you are aware of is the sun shining in on you?  The wonderful sleep of childhood!  (By the way, I believe that is what it is like for a Christian when they die.  Fall asleep here, wake up there with the light of glory shining in your eyes, no gap or awareness of passage of time or anything else in between).

In general, I don’t like bugs, (Why gnats, spiders, slugs? I plan to ask the Lord once I get home) but I make a few exceptions for bumble bees, butterflies, ladybugs and lightning bugs.  Those last two are my favorites! Interestingly the lightning bugs in Virginia look a bit like ladybugs in their coloring and spots when un-lit.

Did you know there are around 2000 species of lightning bugs? (Though only about 136 in North America) Did you also know that they each have different flashing patterns, and of course, the purpose of the flashing has to do with mating.  They range in color from yellow to green to pale red.  Also, even their larvae are luminescent!  (Glow worms!) And did you know some adult fireflies do not eat at all?  Their life span is about 2 months.

Fireflies generate their light by combining a chemical, luciferin, with an enzyme, luciferase, and oxygen. (*Remember, Lucifer means “Light-Bearer”) Luciferin is stored in the cells of the light organs, which are richly supplied with air tubes. Fireflies control light production by regulating the oxygen supply to the light organs. The light produced is merely a by-product of this chemical reaction–a brief release of energy. The “fire” is actually cool, containing virtually none of the infrared wavelengths possible within the spectrum of light. It is also nearly all-visible, containing almost no ultraviolet components. This light is attractive to other fireflies, as well as us, and it makes them one of a few groups of insects to use sight instead of smell to find mates.

Midwestern fireflies are solitary, each searching independently for a mate. Both sexes flash, but the male’s is brighter and more frequent and each firefly species has its own unique male signal and female response. From dusk until the fall of total darkness the males will fly, crisscrossing an area, flashing rhythmically while the female remains stationary on the ground or in a bush and responds to the male with her own flashes. When the male receives an answer, he hovers and orients his lantern toward the female. Eventually he lands near her and they mate.

And did you know that they also have a medical application? Their luciferase is an enzyme that can help in screening for human tumors, in testing for blood problems, and as a fast- acting detector of an infection. It has been on the market in a genetically engineered form for over 10 years.  (Source) *Parenthetical comment above is by Shekinah419

The enzyme is also used in forensics (Luminol for detecting traces of blood).

“Fireflies in the Garden”

Here come the real stars to fill the upper skies,
And here on earth come emulating flies
That, though they never equal stars in size
(And they were never really stars at heart),
Achieve at times a very starlike start.
Only, of course, they can’t sustain the part.

Oh, and get this; though lightning bug species each have a unique signal pattern, some can give a false pattern.  This comes in handy for the cannibalistic ones.  The female gives off a false signal, then when the male comes thinking he’s gonna “get lucky” instead, he gets eaten alive.  (Femme Fatale) Brutal!

Lightning bugs and lady bugs are both beetles.  My other favorite beetle is the tortoise beetle who looks like a gold lady bug.

Their “shell” is actually shiny like 14k gold, but when you hold them in your hand, they turn sort of “see-through” and pale faded pink-orange.  They eat morning glory leaves, and they also will rear up in such a way they look sort of like one of those flying saucers with the spindly legs shown in old movies.  I discovered these guys one day when I had been through a long difficult “spell” in my life, and noticed holes in the leaves of my prized purple morning glories.  I was so excited and delighted about them that I gathered some in a jar the next day to take and show to my ladies Sunday School class at church the next morning.  I took several photos, (though the one above is not mine) and even sculpted a small purple morning glory with a “gold ladybug” on it.  That’s what I call them.  It’s what the look like to me.

This image shows why they are called tortoise beetles: 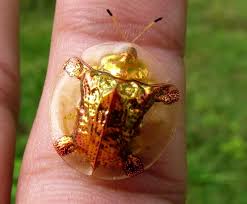 I always say God must have been getting “punchy” from all that creating, by the time He came up with the lightning bug.  (And the duck-billed platypus)

And this guy, the “happy-face spider” (Image found on Pinterest)

I look forward to asking lots and lots of questions when I get to Heaven.  After the initial falling-on-my-face before the presence of my Savior, and the hugs and catching up with loved-ones gone before, and meeting Moses and Elijah and all those guys.

2 thoughts on “I love lightning bugs!”