Plenty of Blessings to Count

You know, the Lord has been really good to me! He didn’t give me riches, instead, He let me learn how to struggle and know how to make do. I grew up in a family that appreciated what they had, and took care of it. Now, it’s relative, of course, we are speaking in the context of America, in which even a lot of the poorest would be considered well-off compared to a lot of people elsewhere on the globe. I just want to acknowledge that.

In the years we raised our boys, there were times we had zero income for a scary-long amount of time, but God would move someone to give, or some other thing would occur that solved a problem and met the need.

I heard a preacher tell of a man who testified that during the Great Depression, he sat at the table at suppertime one day with his parents and 7 siblings, and his father divided up the last chunk of a loaf of bread, into little pieces for each one to have a little portion. His father bowed his head and thanked the Lord for the bread, and he said “Lord, if you don’t mind, I sure would like some ham to go along with this bread, and some greens would be real nice too.” Ge said his Dad went on and added a couple of other things he wouldn’t mind having, and just about the time he said “amen”, there was a knock at the door and it was a neighbor, and that neighbor had brought a basket full off various foods, and every single one of the things his Dad had asked the Lordfor to go along with that bread, were in there! The answer was on it’s way even as he was asking!

That’s the God I worship and serve. The God who makes it possible to smile in the midst of hard personal tragedy. The God who helps you keep getting out of bed and doing life when your spirit is mortally wounded and your body is so tired you can’t hardly think about anything beyond the next 5 minutes.

I look around, and the stuff that is happening in our world sickens me. Most especially the utter disregard for the sacredness if life, the use of children like they are disposable and as if they have no worth at all, and no feelings. I close my eyes and just ache and I ask Him how He can stand it. I know His love is how. He loves those stinking rotten evil, sin-infested perpetrators, and wants to redeem them, and that is unfathomable to us. But what we really fail to fathom is the fact that same evil resides in each of us. You say, No! No way would I ever do such vile things!” No, maybe not, but only because of Grace. Because of Grace you had an upbringing that prevented it. You had parents, grandparents, other forebears who knew and honored God. Maybe their family history departed from God seven generations before they were ever born, and even worshipped false gods or practiced the occult. I think we take a lot for granted. Modern American Christians who have lived a pretty upright life, when we fall into sin, we are generally shocked, and experience disbelief if we find we have succombed to a temptation. We prove how little we really grasp the sinfulness of our flesh and fallen nature.

Today hubby has the day off, and our plan is to just enjoy the day together.

There is a unique blessing promised to those who will read and study the book of Revalation. What that blessing is,is not stated, but can I just say that I think the blissful peace I have despite the fact our world is hurtling headlong toward a brick wall, surely accounts for at least some of that blessing?

Here is another blessing: I’m a granny now! 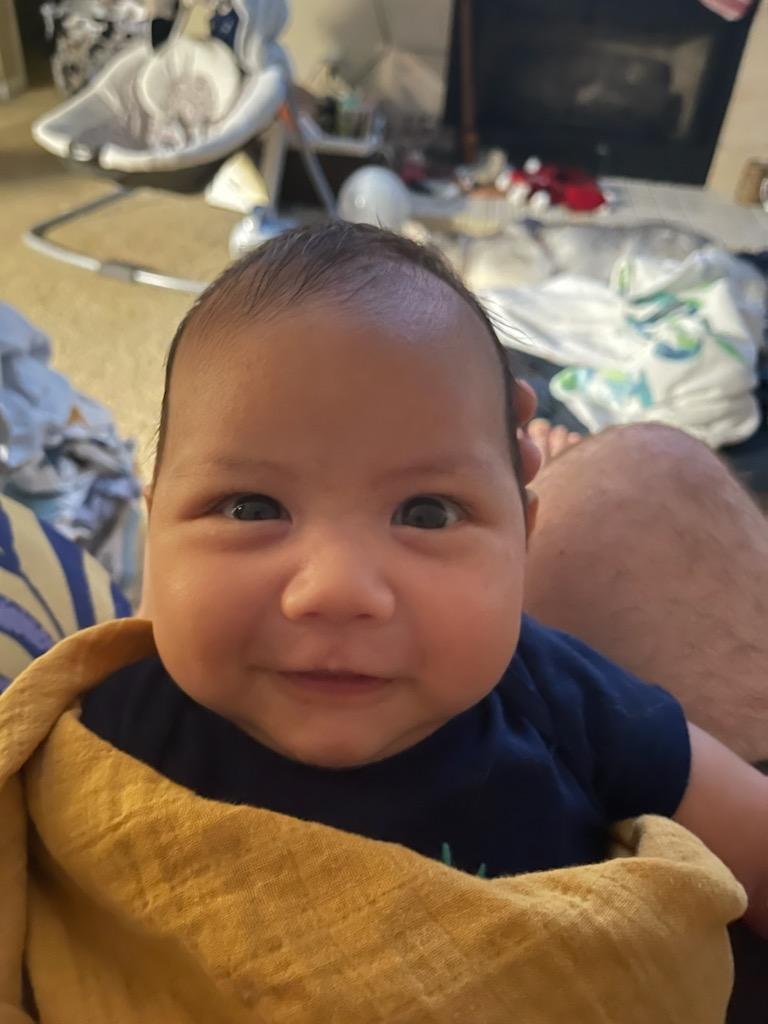 I wouldn’t trade my messy history for a “better one” because I know I wouldn’t aporeciate my blessings, probably wouldn’t even recognize them as such.

It’s a blessing just to sit in our 80 year old house, in my cozy little nook, and “talk” to you!