I’m afraid I’m going to have to “go all Donna Wasson” on Jay Carney’s asinine self!

“Benghazi was a long time ago?”  EXCUSE ME??  Thirty-three weeks and four days?  It takes longer than that for a fetus to mature into a fully formed baby, but I suppose that concept is lost on you as well, since your camp is willing to take an overgrown nut-cracker to the skull of a baby that gestational age, before (or after) ripping it out of the womb.  Good job on reading your line off of your notes, though. (See :33 on video timer, oh and 1:20 and 1:29  and again at 1:58 where you abandon all pretense and just read the tablet).  Jay-Jay, baby, your High School speech teacher must be cringing! Tsk tsk!

But, I can’t say that I blame you. Wouldn’t want to misquote the approved verbiage, there, would you?  For you actually do know how easily your boss can dispose of you.  (I mean, where’s Robert Gibbs now?)  I did a better job of sounding genuine when I wrote down the lie I planned to tell when I called out “sick” to work at my first job as a teenager.  For a guy without a conscience, you’re not that great a liar!  And of course, the all-knowing SNOPES debunked the “graphic photos” of Stevens’ body being dragged through the streets and rabid thugs snapping pictures on their I-phones, so that all must have been “imaginary” too!

My Dad died exactly 3 weeks after 9/11/2012.  Doesn’t seem that long ago to me! I don’t imagine it feels like such a “long time ago” to Ambassador Stevens’ mother, Mary Comanday, or his sister Anne or brother Thomas, the family of Information Manager Sean Smith, and the siblings, parents, wives and children of former Navy SEALs Glen Doherty and Tyrone Woods or the ten others were wounded in the incident.

(Move along now, nothing to see here, pay no attention to the man behind the curtain.)

But then even the Wikipedia narrative has been sanitized, claiming that Stephens died of smoke inhalation and that some random good-willed (and I’m sure very concerned- for-the-dignity-of- Stevens’- body) Libyan citizens risked life and limb to “discover the unconscious ambassador in a dark and smoke-filled room” (with a locked door-what were they doing in there Hoping to get high on the fumes?  So they just happened to discover the body?) and pulled his unconscious body out a window and took it to the hospital, ( Was that before, or after they dragged it through the streets?) and that the body “showed no other injuries”.

Oh, look, there are those helpful Libyan’s now: 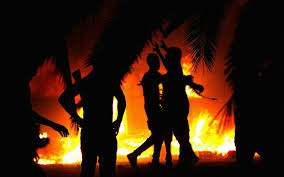 A 22-year-old freelance videographer, Fahd al-Bakoush, later published a video[57] showing Libyans trying to extract the unconscious ambassador from a smoke-filled room,[58][59] where he was found unconscious, which confirms reports that suggested the U.S. envoy died of asphyxiation after the building was set afire.[60]

Some of the Libyans who entered the compound tried to rescue Stevens after they found him lying alone on the floor in a dark smoke-filled room with a locked door accessible only by a window. A group of men pulled him out of the room through the window, and then placed him on the courtyard’s stone tile floor. The crowd cheered “God is great” when Stevens was found to be alive. He was then rushed to the hospital in a private car as there was no ambulance to carry him.[61]

Here is a screenshot, in case the Wiki article gets changed:

Dr. Ziad Abu Zeid, the Libyan doctor who treated Stevens, said Stevens died of severe asphyxiation, that Stevens had no other injuries, and that he tried for 45 minutes to revive

say “Benghazi” to Democrats and they’ll flinch. Some will step back as if you’re carrying a disease. Others will offer a defensive smirk.  “Benghazi happened a long time ago,” Obama’s press secretary, Jay Carney, said the other day, approaching the Benghazi question as if it were leprous.

It is a tactic used by Republican and Democratic mouthpieces. Translation: That’s no story. That’s old news. What’s wrong with you? Don’t you have anything better to do than go after old news?

Whatsamatter, Jay? Cat got your tongue, Mr. Spokesguy?  Hey, it’s okay because, you’re covered under that gag order, right?  I mean, even the witnesses own lawyers are not allowed to ask their clients, the eyewitnesses, everything they need to ask them, so, it’s all buttoned up, and your job now is to dodge and weave, baby, duck that  “tough reporter” challenge the oh-so-scrupulous White House Press Corps and hand-chosen (bought and paid for) mainstream reporters “mercilessly” throw at you.

What in the world are you worried about? Why do you squirm so?  They’ve got your back.  We know that Hillary and Barack are completely innocent, and it was not their fault, after all, they aren’t accountable to anybody, least of all U. S. citizens, families of Navy Seals or Navy Seals themselves, for that matter.  It was the worthless peons left behind when Bush moved out of the office, it had to be some of them that dropped the ball.  Yeah.  I’m sure of it!

“We are unaware of any agency blocking an employee who would like to appear before Congress to provide information related to Benghazi.”

Of course not, honey, we know that! You guys would never railroad a material witness.  No, we know that’s not your (gansta) style. That’s not to say they won’t commit suicide or violate iron-clad protocol by taking a little chopper flight together, or have the rotten bad luck of a defective parachute that just happened not to open.  That’s what happened, right Mr. Spokesguy? Just another handful of completely unrelated instances of random tragedy, that just kept happening.

The mainstream press, your Muslim boss and his elite global masters, make me and a whole lot of other people sick, but mostly, you just make us sad.  You don’t know what you are doing, honestly.  You actually think you are running the show?

How about you, George Soros?  And you, Barack Obama, and you, Mayor Bloomberg, Harry Reid, Nancy Pelosi, John Boehner, Rahm Emmanuel?  And by the way, do you know what your name means, Rahm Emmanuel?  Rahm means “high and lofty”, Emmanuel means  God with us.  Only He isn’t.  God opposes the proud and He is angry at the wicked every day, as they store up wrath against themselves.   You’re all “high on something, and definitely lofty in your own opinions of yourselves, but you are not HIM (God).  And contrary to what you think, none of you have succeeded in throwing off His bands.  You keep on, and He is gonna give you enough rope to hang yourself, though. You may as well write it down, put it in a time capsule, and bury it.  God is still very much in charge and one day soon  you will not only know it, but your knees will bend before Him and your own mouths will confess that Jesus Christ is Lord over all.  Most likely you’ll be doing so from Hell.    And as much as I dislike the entire lot of you, I don’t wish that on anyone.

What I wish is that God would melt your stubborn and hardened hearts, and open your blind eyes and turn on the light in your dark, deceived minds and souls.  What I would like is to see you repent, turn from your wicked ways, and receive deliverance and salvation in Christ Jesus, be real leaders, and tear down your groves and destroy your idols so that God does not have to allow America to be destroyed by nations we once sent missionaries to.  I pray those nations return the favor and send some back and maybe they could show this nation,  which is throwing away with both hands, every good thing God ever gave it, the way back to the old “straight and narrow”. (-for wide is the gate, and broad is the way, that leadeth to destruction, and many there be which go in thereat: Because strait is the gate, and narrow is the way, which leadeth unto life, and few there be that find it).

Well, I doubt any of you will be reading this anytime soon, unless of course one of the lackeys at that huge data center in Utah (readers, say hello to the lackeys, cuz if you’re reading this, they’re tracking you too) takes a notion to bring it to the attention of someone who brings it to the attention of someone who actually has access to you.  So instead, I’m praying for you.  Just like I have been for a lot of years now.  Did you know that righteousness exalts a nation, but sin is a reproach (condemnation) to any people?

Oh, that’s right, in your world it’s not fair for any one “nation” to be exalted.  But it’s not out of some benevolent wish for equality, though is it?  Like the predictable plot in a pathetic B movie, in “redistributing the wealth” you all expect to get your share of the pie, and your promised place in the new pecking order.  There’s a word for what that makes you, but my Bible says I ought not to call you that.  Sufficed to say, you’re in for a rude awakening.  There is one who will come to power with all sorts of promises he won’t keep.  And the really scary part is not how evil that one will be.  Nope!  What you really need to be worried about is the Holy One who’ll show up after that.  It’s gonna be a rough seven years.  But look on the bright side.  At least you won’t have to worry about us odious Christians being here to put a damper on things.  You’ll see us again, though.  We’ll be the multitude on white horses following behind Jesus when He settles the score.

3 thoughts on “I’m afraid I’m going to have to “go all Donna Wasson” on Jay Carney’s asinine self!”